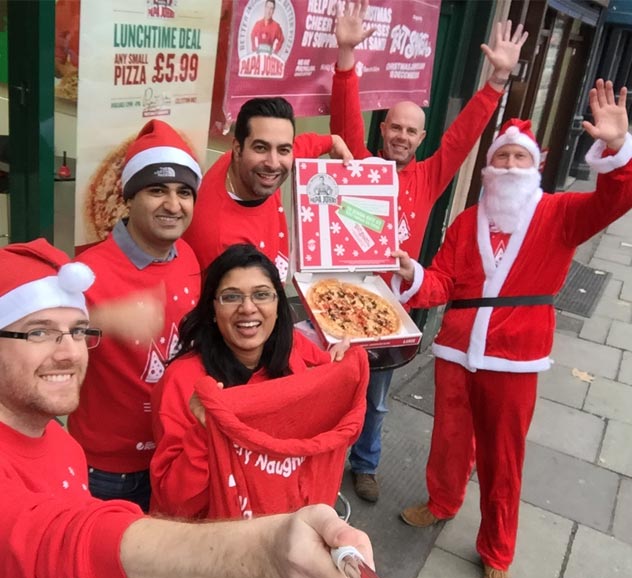 In the run-up to Christmas, alongside delivering all your fresh and tasty pizzas, we also managed to raise over £200,000 for ITV’s national Text Santa campaign.

Here’s a closer look at what this fantastic campaign stands for, which charities it supports and how the Papa John’s team achieved this dough-nation.

Taking place annually, Text Santa is a national ITV fundraising campaign which aims to give hope to families in difficulty in the UK and overseas.

The money helps fund nurses so those with cancer can get the support they need, grants wishes to young children and people suffering with life-threatening conditions, and helps save children’s lives.

This year, Text Santa broke all previous records by securing £8.5 million for charity, bringing the total amount donated to £29.5 million over the last five years.

How Papa John’s Got Involved We jumped at the opportunity to get involved with this fantastic cause and make a difference to people’s lives across the world.

Here’s a look at some of the fun, wacky and interesting ways we decided to get stuck in and raise money: • Donated 50p for every XXL pizza sold during December

• Customers rounded up their order total to the nearest £, with the difference added to a digital charity box

• Held a fundraising day at Head Office, where teams competed against each other to raise as much money as possible using only £100

The final idea in particular helped us raise £8,000, which involved the teams:

• Running their own market stalls and selling food

We even appeared on live TV during the Text Santa show with Katherine Ryan showing it isn’t easy working in a Papa John’s kitchen!

Special thanks should also go to all of our suppliers and agencies that donated items for auction and for hosting their own events as well.

In particular, FKC in London hosted a talent show to raise £1,000. NMP also took part in a quiz, held a Christmas jumper day and guess the weight of the cheese competition, which altogether raised £1,500. All in all, the fundraising was extremely good fun and a great success.

Supporting an Amazing Cause

The money that’s collected goes towards a truly amazing cause which supports the three charities mentioned above.

Thanks again to all of those who were involved in Text Santa 2016.